Read more
The store will not work correctly in the case when cookies are disabled.

History of the Lint Roller

In 1956 Nicholas McKay and his wife, Helen, were asked to chaperone a high school dance at the last minute. Nicholas had not taken his suit into the dry cleaners, so it was covered in lint. To improvise, he took the cardboard from a toilet paper roll, masking tape and wire to remove the lint from his suit. This was the first step in McKay’s invention of the lint roller. Later that year, after some more innovation, McKay submitted his invention into the patent office under the company name Helmac, which McKay partially named after his wife, Helen. 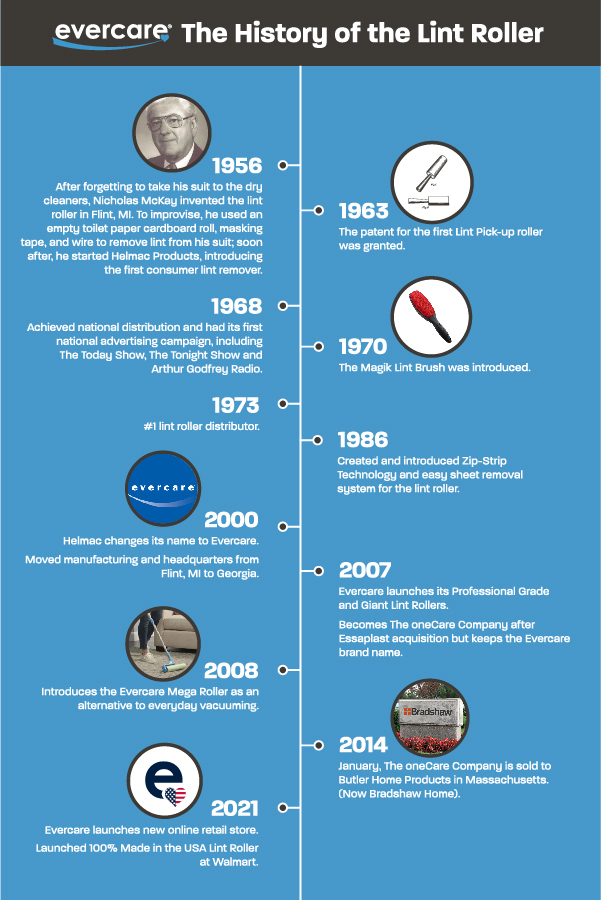 In 1963 McKay received the approved patent for his Lint Pick-Up.

In 1986 Helmac introduces their patented Zip-Strip Technology, allowing users of the lint roller to peel sheets off more easily.

The next several decades saw steady growth for the company not only domestically but internationally. In 1993 McKay welcomed his son Nicholas Jr. into the company. With his help, Helmac grew and introduced new products to the company outside of just lint rollers.

Until 1998, Helmac was the leader in the production and sales of lint rollers. With the emergence of a significant competitor in the lint category, McKay decided to bring in a consulting firm to help with their image. After extensive research, renaming the company and rebranding their lint pick-up was in the company’s best interest. Thus, in 2000 Helmac was rebranded as the Evercare Company. At this time, the company also moved from its headquarters from Flint, MI to Alpharetta, GA.

Between 2000 and 2010, Evercare went through a lot of innovation and additions to its product line. Evercare entered into laundry accessories by acquiring HBD’s laundry line, the dry cleaning business with its professional-grade lint-pick up, introducing a larger lint roller with the Giant Lint Roller, and began manufacturing and distributing under the licensed brands Woolite and Brawny. After they acquired Essaplast in 2007, they started doing business as The oneCare Company. During this time, Evercare also launched scented lint rollers under a license with Bounce. Evercare was also the first to introduce colors to their lint rollers. Then in2008, Evercare created their vacuum alternative MEGA lint roller.

In January of 2014, The oneCare Company was acquired by Butler Home Products, located in Marlborough, MA. Not long after, in November of 2014, Nicholas McKay passed away at the age of 93. McKay may be gone, but his legacy remains in the continuation of Evercare under the guidance of Butler, now Bradshaw Home, and its continuous growth in the lint category today.